Madeline Stuart is an 18 year old from Brisbane and is redefining beauty. She is making her way, appearing in New York Fashion Week modelling for FTL Moda, working for American sportswear brands and makeup brands alike, all in an effort to challenge the stigma surrounding people diagnosed with Down Syndrome.

Madeline’s career started after she made a personal decision to get fit, loosing 45 lbs and sharing her pro-fitness pics with Facebook. Two months later and she was a hit; fueled by her positive attitude and inspirational story.

Madeline’s mother Rosanne explains her daughter and how she came to be the bright star she is, “I always just protected her and shielded her from the negativity, because there was a lot of that, and a lot of discrimination. But she’s grown up in a loving environment, so she just loves everyone and thinks everyone’s beautiful.”

Madeline worked the runway for FTL Moda at their runway show at Grand Central Terminal making everyone take a step back to appreciate what she is achieving. Not only has she lost 45 lbs but she is such a presence of true beauty. She strutted down the catwalk; smiling and waving and throwing out high five, quite the binary of the norm. She was a presence of beauty and youth.

Madeline is becoming quite familiar with the lime-light with the FTL Moda show being on of many she has participated in, showing this is her calling and she will make things change. She tells the world her plan on her website, ‘I hope through modeling I can change society’s view of people with disabilities, exposure to creating awareness, acceptance and inclusion.’

We are seeing these inspirational characters challenging the mainstream ideas about beauty in fashion with Madeline Stuart and with up-and-coming ‘American Horror Story’ star Jamie brewer who not only graces the popular television show but also was featured in Carrie Hammer’s Fashion show in 2015.

Its time this was the norm, time to remember ‘everyone’s beautiful.’ 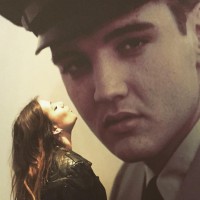