As  Paris Fashion Week – Autumn 2016 draws to an end, the past few days have shown us the likes of Kendall Jenner and Gigi Hadid grace the runway. Other celebrities who have used this week to gain inspiration or simply bask in their love for fashion have been spotted; such as Kanye West, Kelly Rowland, Jessica Alba and Emma Roberts. Instagram has been popping off with first looks, runway photographs and front row views of the shows.

Let’s take a look at two of the most talked about women on the runway these days – Kendall Jenner and Gigi Hadid. These two definitely turned heads as they made their appearance having swapped each others hair styles for the Balmain presentation. Olivier Roustieng (Balmain creative director) truly knows how to grab attention (we all remember Kim Kardashian’s platinum blonde at PFW last year). He is the brains behind Kendall and Gigi’s interesting looks – Kendall, known for her classic brunette hairstyle changed things up by going blonde! Gigi on the other hand has dyed her beach blonde waves brunette, giving her a much edgier look. Although these new looks are temporary we are very excited to see the two girls showing us such a contrast to their everyday looks! Kendall debuted her new hair color through posting this picture on her Instagram.

Image: Instagram – Balmain Posted Kendall and Gigi Spotted At The After Party

Not only were these two supporting the change, Rosie Huntington-Whiteley also showed a stark contrast to her usual self when she posted a picture of herself on the Balmain runway showing off her darker locks.

Rosie Huntington-Whiteley at the Balmain show

Jessica Alba was  also spotted at Paris Fashion week, arriving at the Dior show in a sophisticated attire. Dior Official Instagram posted her look, she kept it simple with block colors black, red and white.

Kanye West attended Paris Fashion Week to set up his Yeezy Season 3 Collection for buyers. After his The Life Of Pablo album reveal and Season 3 collection presentation at New York Fashion Week – Kanye certainly did well in PFW to promote his classic minimalist showroom.

Paris Fashion Week has provided us with some new looks and an amazing chance to see our favorite designers and models at their best – especially through the eyes of their Instagram’s which seems to provide us the privilege of being able to get instant reveals! 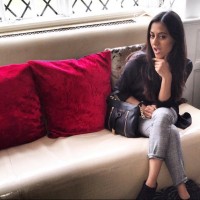