The Best Moments From The 2016 BET Awards

Last night was the annual BET Awards held in Los Angeles, it was a night filled with tributes to Prince, a surprise performance from Beyonce and Kendrick Lamar. The focus was on the current political unrest across the globe. Beyonce won video of the year with her song ‘Formation’, but had already left the ceremony on route to London for her World Tour, however, her mother Tina accepted the award on her behalf. We take a look at some of our favourite red carpet moments.

Man of the night Grey’s Anatomy actor Jesse Williams kept it simple in an all black tuxedo, with white detailing. He was awarded the Humanitarian award, for his active voice in Black Lives Matter campaign.

Jennifer Hudson paid homage to Purple Rain musician Prince by wearing a hooded white jumpsuit similar to the one Prince wore in 1984 in his first rendition of Purple Rain. Jennifer wowed crowds with a vocal performance that could only be appreciated with a standing ovation.

We fell in love with this gem Nandi Mngoma, tv presenter and actress working the red carpet in her own designs, matched with sleek cropped low hair cut, totally winning.

EJ JOHNSON was ready to slay in his very revealing all black ensemble.

KARRUECHE TRAN is totally winning! The model and actress stins in a sexy, little black dress paired with gold heels and accessories.

Janelle Monae, continued to serve us style in a floor length black and white 2 piece suit, with a large minimalist hat. She also joined A-listers in honouring the legend Prince. 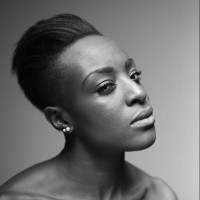